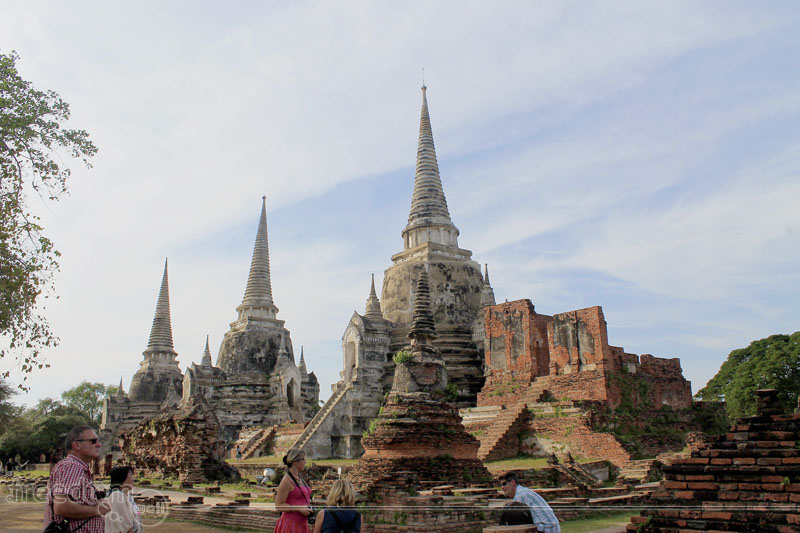 Ayutthaya Kingdom [1351 to 1767 AD] was once considered as Southeast Asia’s most formidable. But not until 1767 when it fell to Burma’s fury. At the present, all that remained were ruins and the reinforced chedis. These ruins were under the protectorate of Ayutthaya Historical Park and were listed to the UNESCO World Heritage Site.

We visited the Wat Phra Si Sanphet and the Grand Palace ruins after our tour inside the nearby Wihan Phra Mongkhon Bophit, making it the second stop of our “temple run” in Ayutthaya – part of the day 2 of our Indochina Tour.

The most noticeable structures of the ruins were the three main chedis or stupas. These stupas sheltered the remains of the three of Ayutthaya’s kings. Built in between these towering figures are believed to be mondops or square edifices with pyramidal roofs.

Wat Phra Si Sanphet was one of the most important religious compound during its time, because it was situated within the Grand Palace grounds. Though it was a temple, the place was exclusively used by the royals. No clergies were allowed to reside on its ground.

Around Wat Phra Si Sanphet were small chedis wherein some of it were partly damaged or completely destroyed. The walls, on the other hand, were dilapidated. The Grand Palace previously stood in the northern edge of the temple, unfortunately, only few columns were left standing.

Though what we saw were just ruins, it holds a lot of stories. After all, it was the witness on how the 400 years of Thai history were written.

If you happen to stray in Ayutthaya, make sure that you won’t miss this part.