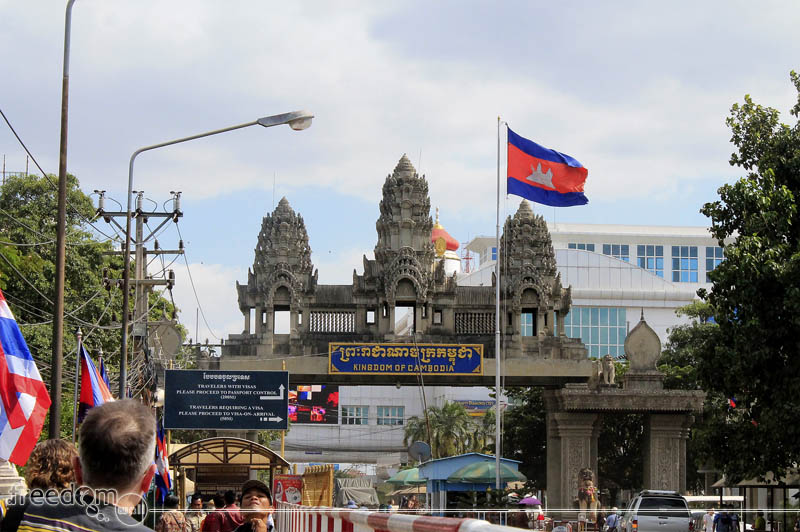 We checked out early on our 4th day in Bangkok to catch the 05:55AM train to Aranyaprathet, the closest Thai town to the Cambodian border at Poipet. There are buses that ply directly from Bangkok to Siem Reap but we chose the train because we wanted the tour to be more indulging. We wanted to blend closely with the locals and try every public transport available.

From Lub d Hostel in Siam Square, we took a taxi to the Hua Lamphong station of the State Railway of Thailand (SRT).

The taxi was our last resort since the Skytrain (BTS) and the MRT weren’t operating yet that time of the day. The driver asked TH฿200.00 for the trip. We had no choice then but to take it. We knew that it would be hard for us to find cab drivers who will proactively use their meters, especially when we were coming from Siam Square, a known tourist hub. It wasn’t a bad deal though. We were three in a group, so we only paid TH฿66.70 each.

Train from Hua Lamphong to Aranyaprathet

We immediately bought our train tickets at Hua Lamphong station. The fare for the third class seat is TH฿48.00 each (as of December 2013). It was really cheap for a 255-kilometer railway transit route.

Remember: There are two trains that leave Bangkok daily to Aranyaprathet, the other one leaves at 01:05PM. Travel time is 6-7 hours.

Since both the Thai and Cambodian Immigration counters close at 08:00PM, it would be better to take the first trip (05:55AM) or else, you will end up staying overnight in Aranyapathet, and then wait for the 07:00AM opening to cross the border.

We boarded the train waiting at platform 6 of the station. I am not sure if the trains to Aranyaprathet parks at the same platform at all instance, so verify it at the ticket counter. Though train destinations are posted at the platform corner, it wasn’t too obvious for the first timers (see photo below).

Couch officers randomly inspects travel documents of Thais and Cambodians crossing the border. Make sure you have yours ready just in case they’d mistakenly identify you as one (Filipinos have similar features). It actually happened to us when one of the officers asked the innocent-looking Aaron to show his passport.

Songthaew from Aranyaprathet to the border

The distance from the Aranyaprathet railway station to the Thai Immigration office is roughly 6 kilometers. We took another ride after the disembarkation. Available rides are tuktuk and songthaew.

We took the songthaew because we were lead to it by a mob of tourists who were also going to cross the border. While my companions squeezed themselves with the locals and tourists packed like sardines inside the public transport, I secured myself on the rail extension just outside the truck. We paid TH฿15 for the fare.

Con: The Songthaew made a stop at Thai Customs Office to inspect suspicious-looking passengers, and then unload those without proper documentations. Some refused at first so it caused some minutes of delay.

Pro: At some point on our journey, there were men who stopped the songthaew, and then asked all the foreigners to disembark for document inspection. The lady conductor did not allow us. That gesture saved us from falling into an impending visa scam. We were so grateful to the lady who also made some “word fight” with those folks.

Note that taking tuktuk would make you vulnerable to this type of scam because some drivers may take you to the swindler’s lair.

To clear our immigration obligations with the Thai authorities, we had our passports stamped. That was to inform the the immigration that we moved out within the allowed length of stay. Also, we won’t be allowed to enter Cambodia if there were no exit stamps on our passports.

The songthaew dropped us close to the Thai immigration walkway so we just followed other tourists, queued in a very long line, and then had our exit cleared.

Upon completing the exit procedure, we walked along the friendship bridge to the Cambodian Arch. A big information sign board was posted close to the arch stating the distance to the Visa-on-Arrival office [for those travelers requiring visa / 50 meters] and to the Passport Control [for travelers with visa or with visa-free entry privilege / 200 meters].

Filipinos can enter Cambodia without visa so we walked 200 meters further after passing the arch. The passport control office is just across the casino with blue glass windows [see the photo below].

For foreigners who are required with  a visa before entering Cambodia, you can get your Cambodian visa in advance to avoid the hassle.

By the way, Poipet is the name of the Cambodian town that welcomed us after crossing the border from Aranyaprathet.

While walking to the passport control office, a guy approached Aaron. He made the right choice since Aaron is divinely accommodating, entertaining, and unassuming. The guy asked some information, such as our destination, the number of individuals we had in a group, etc., which I believe Aaron cheerfully answered.

While I waited for Roderick and Aaron in the waiting area next to the immigration office, I met the guy who previously approached Aaron. He told me to get inside the shuttle to the international terminal. I told him that I am still waiting for my companions, then he replied, “Yeah, you have two more friends, right?”. I started to wonder what other information did Aaron divulge to that guy.

We boarded the shuttle when Aaron and Roderick completed their entry process. The guy from before kept on tagging us. He also rode the shuttle telling some stories and, of course, offering a minivan to Siem Reap for TH฿400 (US$13) or a bus for TH฿350 (US$11) (Yes, they still accept Thai Baht). Since he was really friendly, we took the minivan offer. Also, I anticipated that the bus may take some time to get filled because most of passengers in the shuttle preferred the minivan.

Upon reaching the terminal, the guy who offered us the ride advised us to exchange some of our Dollars and unspent Baht to Cambodian Riel. He told us that even though US Dollars are widely accepted in Siem Reap, some local vendors preferred Riel.

We changed some to Riel, and then we later realized that we had so much paper to carry in our wallets. The exchange rate in the terminal was 1 US$ = 3800 Riel.

We left the terminal immediately after settling our fares.

We reached Siem Reap nearly 5 in the afternoon. That was almost 10 hours of travel time. The long lines in the immigration counters and the songthaew stop in the Thai Customs office were the major contributors of the extra hours of delay of our land trip. Also, the train from Bangkok left on time but arrived pretty late in Aranyaprathet. 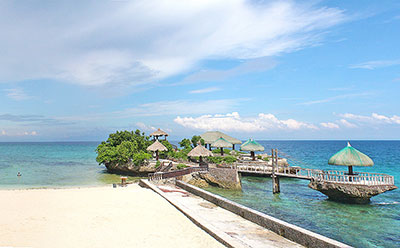