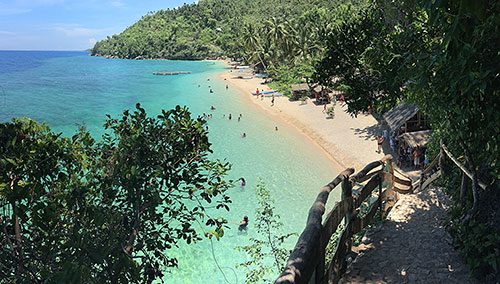 Bojo River and Hermit’s Cove: The Stunner’s of Aloguinsan

Everything happened on a random. I immediately hit going the moment I saw the Facebook invite notification. A weekend getaway to Aloguinsan is something I couldn’t afford to miss, after previous derailed plans.

Though the trip was going Dutch, resisting would mean my loss. The chance of traveling with the awesome folks of Cebu Bloggers Society is an opportunity in itself.

Aloguinsan seats southwest of Cebu City and is sandwiched between the municipalities of Barili on its south and Pinamungajan on its north.

The place seemed closer to the metro but getting there is a bit of a frowner. The southward traffic gridlock, the crooked highway, and the cramped public transport discourages partly willing travelers. However, if you give in to your adventurous genes’ persistence, you will definitely find your way to Aloguinsan—no matter how hard it is to reach.

How We Got There

From Cebu South Bus Terminal, we hopped on a minibus to Pinamungahan via Carcar. Despite being so small, the conductor kept on compressing the passengers to fill every spaces with paying occupants. The legroom was unsurprisingly small. My knees were constantly rubbing roughly with the seat in front of me. I also had to fit my butt to the restricted space. Sleeping is nearly impossible.

Travel time was almost three hours, though private vehicles could take it in less than two.

Another option is to take a Toledo-bound bus, and then transfer to a jeepney bound for Aloguinsan. The advantage of this route is the chance of boarding a comfortable bus to Toledo. However, this route may eat a lot of your travel time compared to the track we took.

Booked our Aloguinsan Tour at The Farmhouse

We alighted near The Farmhouse, which hosts the municipal tourism office. It was close at that time, so we headed to the town’s public market to have our breakfast.

We had no specific itinerary that day but we planned to try Bojo River Cruise first before frolicking along the gorgeous strip of the Hermit’s Cove.

We paid ‎₱400 each for the Bojo tour. That only includes a guided cruise and swimming.

I heard they offer packages with meals. The 650-peso package includes welcome lei, a refreshment, handicraft demo, snacks, lunch, river cruise, and swimming. However, to avail the 650-peso package, you must book your tour two days in advance.

Since the tourism fees of Aloguinson’s top tourist spots are centrally collected at The Farmhouse, we also settled our entrance fee to Hermit’s Cove, which is ₱100 each.

Our payments did not include the fare to the drop off areas. We had to hire a motorbike taxi (habal-habal). Good thing that the habal-habal fare had been standardized by the LGU and the tourism proponents. Excessive fare collection was avoided.

We received an orientation before we started the actual tour. According to our guide, Bojo actually means springs, also known locally as “tubod”. These springs are contributory to the aquamarine river.

Bojo River is saline at high tide due to the intruding seawater. This makes the riverbank an ideal ecosystem for mangroves and plankton, and at the same time, a nesting sanctuary for mothering fishes.

Our guide paddled us along the one-kilometer river while introducing us the mangrove species we met along the way. It was rather surprising to hear him mentioning their scientific names and identifying the species based on their physical features.

Our paddler brought us past the mouth of the river and showed us the coral gardens from the surface. We were not allowed to get off because of the strong current. He paddled us back to the river and encouraged us to swim when it was safe to.

By the way, Bojo River Cruise is operated by Bojo Aloguinsan Ecotourism Association (BAETAS), which was recognized as the winner of the 2017 ASEAN Tourism Award (ASEANTA) for Best Community-Based Tourism (CBT) in Southeast Asia.

On the other hand, Bojo River emerged as one of the world’s Top 100 Sustainable Destinations in 2016, and that is according to Green Destinations.

From Bojo River, we headed to Hermit’s Cove. The ride was scorching, grubby, and rough. The road was already in place but wasn’t paved. Rocks shot around in projectile every time they got side hit from the rolling wheels. The motorbike riders are pretty careful nevertheless.

At the end of the road is a stairway to the Hermit’s Cove. Under a bright sunlight, a picturesque blend of ivory, green, and aquamarine peeked through the cliff bush. The water was so clear that you can see the sand and rocks beneath it.

Before we walked down the stairway, we registered at the tourism booth, which is compulsory for all tourists. By the way, the ₱100 entrance fee we paid at The Farmhouse already includes a use of a cottage.

It was lunch time already, so we take out some food from the eatery near the tourism booth, and brought them to our cottage for lunch.

The beach was somewhat crowded that visit. Every cottage was occupied. Other guest ended up taking shelter under the shade of the beach trees.

The strip was pebbly and the water fronting it was quick-deep. We loved the spot near the cliff. Aside from getting a natural sun shield, the water below it is cool and relaxing.