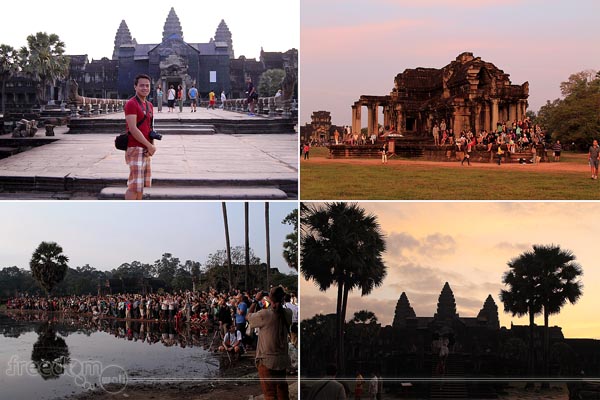 I never thought that I would be crossing out one great entry in my bucket list this year. This 12th-century temple was always a dream and then, just this December, I finally laid a hand to the world’s largest religious- and well-preserved monument – the Angkor Wat.

Angkor Wat forms part of Angkor, the seat of the Khmer Empire (9th – 14th century AD) and was built during the reign of King Suryavarman II.

We arranged with our tour guide the day before to pick us up in our hotel at 5:00AM for us to witness the sunrise. Due to excitement, I was wide awake 2 hours earlier than our call time – even though I slept very late to spend some ample night time in the downtown.

Barang, our assigned tuktuk driver-slash-tour guide arrived a little late – I did not complain, I was excited. Also, we already made a full payment to the association, thus seeing someone to get us relieved all our worries from being scammed. Well, Aaron was the most happy. He was over-thinking it.

It was still dark when we arrived in the temple, no, not the temple yet, but in front of the main walkway to the temple. We followed several others through the sound of their footsteps and the faint illumination from their spot lights.

We waited, along with the large group of tourist, for the sky to shimmer in orange and red. From pitch black, it slowly turned blue, then burst into orange and red. That scenery wasn’t disappointing. The sky wasn’t fairly clear, so we weren’t able to witness the perfect sunrise.

Immediately after the sunrise viewing, we explored the inside of the temple and I was startled with what I saw. The crafts, the artistry, the columns, the hallways, the corridors, the murals, the towers, the ceilings, the vastness, the statues, and everything within the edifice or the entire complex were all impressive and stunning.

As they say, “no words can describe the feeling”. You should be there to be able to relate with the thrill and excitement.

Some areas where inaccessible for tourist because they’re either undergoing some maintenance or has structural safety issues. But it wasn’t a reason to complain since it was for everybody’s benefit, anyway.

We left the Angkor Wat for Angkor Thom after nearly three hours. I was still startled when we departed and I couldn’t take my eyes away from it as we moved further. It was truly great experience.

The Angkor passes are sold in one-day (US$20) and three-day (US$40) blocks that should be used on consecutive days. The passes includes Ankor Wat, temples within Angkor Thom, the Ta Prohm and other neighboring temples.