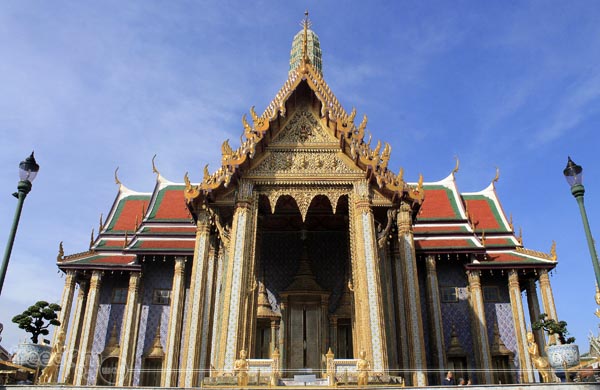 Amazed and Dazzled in the Grand Palace

The Grand Palace opens daily at 8:30AM so be sure to be there before the mob rushes, because if that happens, you’ll find a hard time looking for an empty space for your photo ops. The palace closes at 3:30PM but the last tickets are sold at 03:00PM and the last free guided tour starts at 03:15PM.

The day pass costs TH฿500 and you probably need at least half day to fully explore the palace.

The Grand Palace does have some dress restrictions. Shorts, sleeveless, revealing or plunging neck lines, and flip flops are not allowed. And if you insist on wearing the prohibited attire, you can rent layers for TH฿200 at the entrance (few steps from the main gate).

In my case, I wore shorts since it wasn’t the only stop for us that day. I sweat a lot with just a little heat so I had to wear something refreshing and “aerating”. I put on my pants (over my shorts) before entering the palace which makes it more fiery (what I was thinking).

There were two lanes in the secondary gate to the palace: one for the locals and the other for the foreigners. I think the segregation was for them to easily decide which pamphlet (English or Thai) to hand over – and that saved time asking every guests.

There were free tours but we were a little late for the first guided tour of the day so we wandered on our own, visiting every corners of the palace with the guidance of the distributed pamphlets.

The first thing that caught my attention were the intricate wall crafts and designs. These masterpieces were handmade and the symmetry were carefully observed. It was almost perfect. The way its builders duplicated the complex patterns were even a lot enthralling. The entire architecture and the dazzling ornaments made the entire complex really majestic.

The Temple of Emerald Buddha

One of the most visited area in the Grand Palace is the Royal Monastery of the Emerald Buddha. Buddhist tourists visit the temple to wish and pray.

We left our footwear when we entered the temple. Racks were placed outside for safekeeping of tourists’ sandals. Taking photos and videos were also not allowed while inside the temple though you can take photos while still at the hallway.

We saw some tourists dipping the lotus bud in the holy water and sprinkled themselves, their friends, and the members of their family. The lotus, by the way, is a sacred flower for the Buddhist that symbolizes purity (bud) and enlightenment (fully-bloomed).

Sadly, other sections of the palace were closed, undergoing maintenance, repairs, and general cleaning in preparation of the King’s birthday. But that wasn’t bad at all, since we got a chance to peek on the important infrastructures within. And ’twas good thing that the authorities did not close the entire complex while preparing for Thailand’s National Day.

After spending almost three hours in the grandest place in Bangkok, we walked towards the Temple of the Reclining Buddha or Wat Pho, which was located just beside the palace.