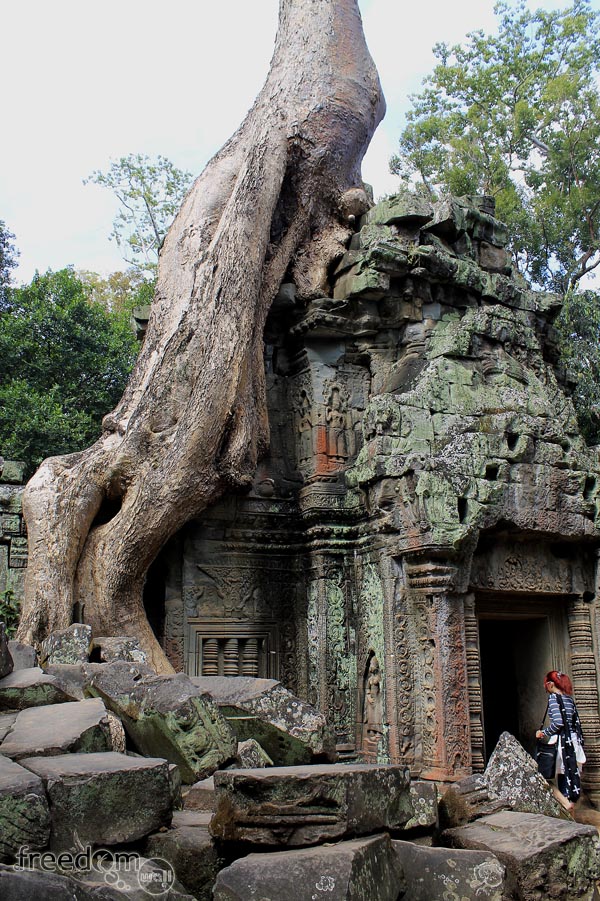 From Thommanon, our guide drove us to Ta Prohm, our final stop in our Angkor Tour. When Aaron heard that it was the featured location of Angelina Jolie’s  2001 film, Lara Croft: Tomb Raider, he surprisingly got excited. Maybe he was already well rested when he refused to climb the Phimeanakas, and he’s also a great fan of places shown in the popular culture.

When we arrived in Ta Prohm, we noticed that the place is heavily vegetated with huge trees. We entered the compound via the west gopura, a designated gate for tourist entrance.

We did not immediately see the temple. We had to walk a little further along the dusty walkway to see its greatness and beauty.

After few minutes of stroll, Ta Phrom eventually showed itself. Tourist were almost in every corner.

Ta Prohm, which is originally called Rajavihara, was built according to the style of Bayon, with the tower faces missing. Located in a jungle just 1 kilometer on the east of Angkor Thom, Ta Prohm offers  picturesque landscape and photogenic ruins with huge roots gone sprawling to its galleries, walls, and towers.

Some portions of monument were falling due to its age and because of the roots that crippled its foundation. Good thing that conservation and restoration efforts were made. Thanks to the Archaeological Survey of India and the APSARA (Authority for the Protection and Management of Angkor and the Region of Siem Reap) which reinforced the structures to inhibit the degradation and help it to endure another decades.

We did not spend so much time in the temple since we still had a bus to catch. We checked out at Angkor Wonder Hostel and headed to the bus terminal where we waited our ride to Phnom Penh.