Haki (覇気?, literally means “Ambition”) is an ability of every living being in the world of One Piece. It comes in three varieties: Observation Haki (見聞色の覇気 Kenbunshoku no Haki) allows to sense the presence of other beings and predict their movement (which is also know as Mantra in Skypiea, a sky island kingdom of the series), Armament Haki (武装色の覇気 Busōshoku no Haki) allows one harden one’s body or enhances weaponry capabilities, and the rare Conqueror’s Haki (覇王色の覇気 Haōshoku no Haki) enables one to render beings of weak determination unconscious.

Haki” is a power that lies dormant in all the world’s creatures… “Presence”, “fighting spirit” and “intimidation”… It is not different from the things that humans can naturally sense such as these… ‘The act of not doubting’. That is strength! 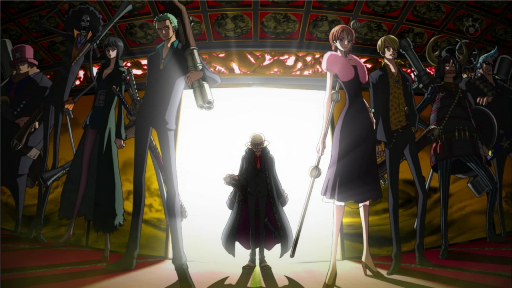 In the latest episodes of One Piece, the Straw Hats, lead by their Captain Monkey D. Luffy, are moving their adventures to the New World, the second half of the Grand line. The anime shows their current adventure in the Mermaid Island while the manga rolls Luffy’s encounter with the gas gas fruit user with 300 million beli bounty, Caesar Clown. Also, the pursuit of the crews adventure requires them to be extra strong since stronger enemies await for them ahead. That is why Luffy agreed to train for two years under Silvers Rayleigh’s tutelage. The training’s main purpose is in order for Luffy to acquire Haki.

After the 2 years arc (training), the Straw Hats capable of using haki are:

Monkey D. Luffy (the Captain) – Luffy unconsciously used his Conqueror’s Haki during his fight with the Snake Princess’ (Shichibukai, Boa Hancock) sisters and in the Marine fold saga while saving his foster brother Portgas D. Ace (Episode 569 of the Manga). After two years of training with the Dark King Silvers Rayleigh, Luffy has now full control of the Haki types. Dodging a bullet from fake Luffy’s gun and rendering them unconscious are concrete proofs of Observation Haki and Conqueror’s Haki respectively. Destroying a Pacifista is an evidence of Luffy’s mastery of Armament Haki.

Roronoa Zoro (the Swordsman) – There is no direct encounter that Zoro shows Haki mastery. But with Luffy’s  conversation with Trafalgar Law in Episode 668 of the manga, Luffy revealed that Zoro is capable of using Haki. To fight a Logia User like Caesar Clown, one should know how to use Armament Haki to be able to touch the Logia’s fluid body. Also, Zoro’s previous fight encounters may prove that he can use Observation Haki.

Sanji (the Black Leg) – Also in Episode 668, Luffy said that among his nakama (crews), the ones capable of using Haki (Armament) are himself, Zoro, and Sanji. Episode 672 shows a concrete evidence of Sanji’s ability to use Observation Haki while looking for Samurai Kinemon. He is using Nami’s body at the time.

It may not be shown but the rest of the crew can be able to use at  least one Haki. Haki (except for Conqueror’s Haki which only few strong-willed possesses) is inert to One Piece characters however, they need to have training to fully utilize it. Robin, being trained by Luffy’s father, Money D. Dragon, may know how to use it. There is no life-threatening encounter they have after the two years arc so she may be hiding such ability all this time. Usopp haven’t tried firing his armaments to a Logia so its hard to prove that he’s capable of Armament Haki but provided that his weaponry is a lot more powerful, he may be able to utilize Haki. Brook is not too far to learn it while Nami, Franky, and Chopper can learn while on the journey.