I Saw Myself Sleeping: Was it an Astral Projection?

Written by Ian Limpangog
Share this article:
FacebookTwitterLinkedInPinterestEmailRedditGoogle+WhatsAppStumbleUpon
Home » Blog » Personal » I Saw Myself Sleeping: Was it an Astral Projection?

Directly in front of my room’s door was a window facing the pathway where our neighbors incessantly pass back and forth. Their gaudy chats and footsteps made me awake in the midst of the day.

When I opened my eyes, I could barely see the light from the wooden jalousie which was shaded with shadows of the passers by. I tried to grab the switch beside the doorway but I wasn’t able to turn the light on.

The fluorescent lamp in that room was not integrally part of the house’s electrical system. My uncle installed it by running an insulated wire from an outlet (connected using a plug) to the bulb. He mounted a switch midway (beside the doorway and right above the headboard) for easier on-and-off access.

I checked if the wire was plugged properly at the outlet near the bed’s footboard across the room. Halfway to the other side of the room, I inadvertently glanced to the mattress. I saw a guy lying on the same side of the bed and using the same pillow I used prior.

The curiosity of knowing the man overthrew my will to turn the light on. So I changed direction and pointed my footsteps to the man sleeping. It was dark so I wasn’t able to recognize him even at a short distance. I hesitantly hover over his face, and guess who I found…Oh My God! I saw myself sleeping! 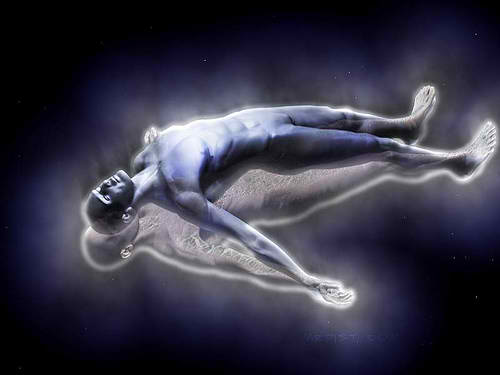 I cannot describe what actually happened next to that. The darkness made it absolutely ambiguous. I scarcely see a thing and was conquered with extreme fear and panic.

I felt my legs becoming too stiff to control with an unusual numbness. I wasn’t sure if it was my body’s normal reaction to fright or a struggle for me to get awake.

My hands were gripping tightly on the bed sheet, I almost tore it into pieces. I swung my body left to right as if I was trying to break away. While doing the struggles, I did not forget to pray.

I remained in such state for minutes until I finally got awake for the second time. I immediately grabbed the plug near the footboard and plugged it on. After few blinks, the fluorescent lamp shimmered light in the room exposing its corners. I then felt the cold sweats dripping slowly around my face.

I was alone that time since my uncles were on their day job duties while I was on a night shift. It was past twelve noon so I got back to sleep (reluctantly) and this time, with lights on.

I experienced this weird and eerie encounter twice last year, 2011. When I was a kid, 7 to 11 years old, I frequently saw myself sleeping and I traveled as far as the galaxies. The final stage of this travel was seeing nothing but a total darkness. Then, I struggled to wake myself up. It became less recurrent when I was in high school and with very few experiences in college.

I am now 24 and it is an extreme enigma for me why it occurred again. When I opened these stories to my friends, they say it was an astral travel.