Wow! I don’t read the books so I only found this out when I saw the final installment of Harry Potter Series- Severus Snape is protecting Harry Potter from the very beginning.

He is Hogwart’s Potions Master, though he is widely rumoured to covet the Defence Against the Dark Arts post as shown in the first book. Snape is a sinister and malicious teacher who makes frequent snide and disparaging remarks at Harry’s expense. He quickly becomes the primary antagonist of the book, as Harry suspects him of plotting to steal the philosopher’s stone, and of attempting to kill him. Only the climax of the book reveals that Professor Quirrell, in league with Lord Voldemort, is the real enemy; Snape, suspicious of Quirrell, had been looking out for Harry throughout the book.

As most of us suspects that Snape is aiding The Dark Lord, J. K. Rowling is enjoying writing about Snape, a completely mysterious man in the book. And we indeed believe he was when he killed Albus Dumbledore which in turn were done as planned by both Albus Dumbledore and himself.

The first time I saw Snape’s tears, I believe he is a good man as Harry did. 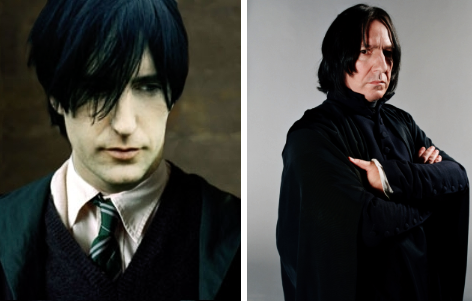 He even sent the Silver Doe (Snape’s eye?) which led Harry to the Gryffindor’s sword which destroyed Salazar Slytherin’s Locket, one of the Horcrux.

J. K Rowling was very successful in her creative antagonist-like portrayal of a hero. I love the twist and the story behind the love interest of Snape to Harry’s mom, Lily