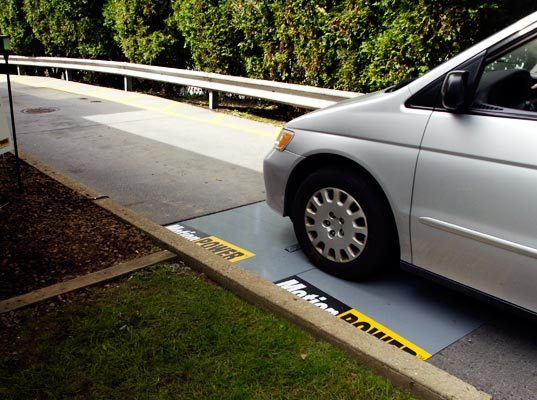 Several governments of the world including research firms and power investors are looking for a greener way to produce electricity especially during these times when we are all facing the rampage of climate change. Most of our power plants today are generating tremendous amount of greenhouse gases that increase the temperature of the universe resulting to a more destructive force majeures.

Hydro-electric power plants were long been considered but is not enough more particularly to water-scarce territories. Solar or photovoltaic cells are installed to some edifices to harvest electricity and wind mines are potentially a wiser option. And lately, a new addition to these safe and green electricity producers is the Electro-Kinetic Road Ramp which is invented by the Dorset inventor, Peter Hughes.

Electro-Kinetic Road Ramp or speed bump is designed to generate electricity when a vehicle passes over it. It is made up of articulate plates that move up and down in a certain mechanism and eventually generates electric current for every weight exerted.

What is very interesting in the device is that, it can harvest something from a bigger problem. In the Philippines, more specifically Metro Manila, slow traffic are congesting its major highways and I guess the Road Ramp has more spaces for it to collect fees, I mean electricity from these vehicles. It is silent and comfortable to be used in parking entrance and exits, residential area streets and other roads that regulate vehicle speed. Toll gates may also install the Electro-Kinetic Road Ramp.

In average, the Ramp can generate 5-50 kW of electrical power which then can be used to light street lamps, traffic lights and roads signs.